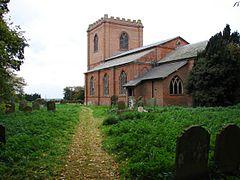 Baumber is a village and civil parish in the East Lindsey district of Lincolnshire, England. It is situated approximately 4 miles (6 km) north-west from Horncastle, and at the junction of the B1225 and the A158 roads.

The Grade I listed parish church is dedicated to Saint Swithin. Built in stone, it was encased in brick in 1758, and restored in 1892. The lower part of the tower and two doorways are Norman. A lead coffin found in the churchyard is included in a list of Roman coffins found in or near Horncastle. Under the chancel of the church is the Newcastle family vault, which was their place of burial until 1820, prior to the disposal of their Baumber estates. There are church inscriptions to Francis, the grandson of Henry Clinton, Earl of Lincoln, who died in 1681, and Priscilla his wife who died in 1679. An incised stone slab to John Eland (or Ealand), who died in 1463 or 1473, and his two wives, formerly in the floor, lies against the west wall of the north aisle.

The manor of Baumber was held by Thomas Dighton, whose daughter and heiress married Edward Clinton, 2nd son of the first earl of Lincoln. On failure of an heir in the elder branch, the earldom devolved to the son of this Edward, whose successors obtained the Dukedom of Newcastle. The estate continued in the possession of the family until it was sold to Thomas Livesey of Blackburn, Lancashire in 1810.

The manor and estate was centred on Stourton Hall ( 53.2630, -0.1762 ), built in 1810 by Joseph Livesey. It was later rebuilt and enlarged with Ancaster Stone, but was demolished in 1955. Livesey's descendants held the manor into the 20th century.

A Wesleyan chapel was built at Baumber in 1844.

In the 19th century the parish had repute for its racing stables, at which the 1875 Derby winner Galopin was bred.

Source and more information on Wikipedia.